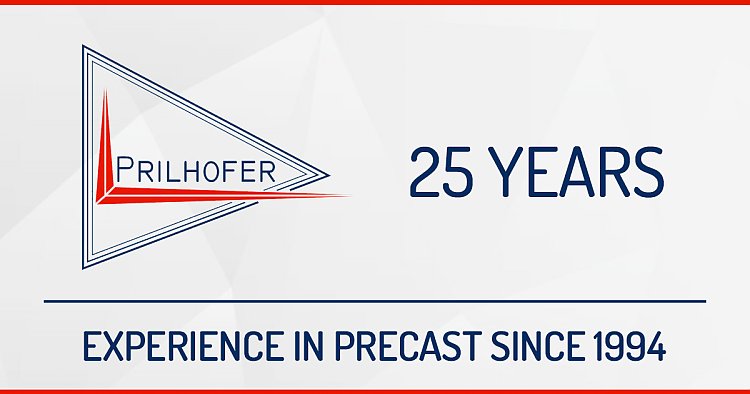 Equipped with some savings, willpower and the vision to support customers around the world with their investment decisions and promote the development of the precast industry, Christian Prilhofer set up his own business in 1994, thus laying the foundation stone for 25 years of success. 25 years Prilhofer Consulting depicts the story of a man of great visions, a real self made man. Let`s start from the very beginning:

Christian Prilhofer began his professional career in the precast concrete industry with the former Filzmoser Maschinenbau (today EVG) in Austria as a constructing engineer. Shortly after he became head of the construction department responsible for reinforcing steel plants and systems. Later he was employed with Reymann Technik Germany and Austria both as a project leader for the planning of precast concrete plants and as a sales engineer.

In 1994, he founded his own company “CPC Christian Prilhofer Consulting” in Freilassing, Germany. Christian Prilhofer soon acquired a reputation as a creative planner and excellent consultant, which ensured that in 1995 he received his first major contract from the Innbau company, where he planned the complete ceiling system on a green-field  site.

While continuing on the path of success the company has been increasingly in demand at international level with additional employees joining the organisation. In 1996, the planning of a plant for solid walls and special parts started with the Kerkstoel company in Belgium. For the first time a separation between the  processing and transport level has been created. Christian Prilhofer developed the first fully flexible concept with a high degree of automation, which has since proven its worth in practice. Due to the project realized in Belgium Prilhofer Consulting caught the attention of additional European organisations.

With the opening of a second office in Austria in 1999 and the foundation of GERICON (in cooperation with ZPP Ingenieure AG from Bochum, Germany) in 2012 Prilhofer Consulting ensures to meet the global demand for precast concrete buildings by means of comprehensive services such as construction systems, architecture, urban and factory planning, etc.

Prilhofer Consulting – A global player in the precast concrete market

Thanks to the right strategy, its courage and stamina, and a clear view of the future Prilhofer Consulting has become in the last 25 years a global player in the precast concrete industry. Christian Prilhofer is a globally renowned specialist, who has patented numerous inventions, as well as a valued contact person. Since 2009, he has been actively involved, amongst other functions, in organizing the Engineering Days, a discussion platform between operators of precast concrete plants and the technology leaders of the industry. Furthermore, he significantly contributed to the fact, that since 2016 the Engineering Days are taking place in China on a regular basis as well.

Visions for the future

“The right planning solely – from urban planning to the creation of infrastructure, through the architecture and the construction system, a well-designed precast concrete plant to the completed building – enables the construction of quality housing on a worldwide basis within a very short time.”

Several advantages result from the industrial prefabrication of precast concrete elements, particularly for this genuinely topical issue: in addition to a higher level of quality and precision, personnel costs have been significantly reduced. Compared to traditional construction sites, the buildings are being erected in a much shorter period of time helping to protect the environment and reduce noise an dust pollution. As a natural material, concrete is 100 % recyclable and, in combination with steel, forms a secure, sustainable and earthquake-resistant building material with low abrasion.

Thank you for the last 25 years!

Prilhofer Consulting looks forward to facing the common challenges ahead and would like to thank all its customers, business partners, staff members and long-standing companions for the pleasant cooperation.

Experience in precast since 1994